ANSILVER® Profi is a modern ecological mix against mould and bacteria. It is containing biogenic compounds of silver designated to prevention and sanation of an interior and exterior of buildings. Most of all, it can be used for stabilization and preventive treatment of a plaster, can be put into a coating and grouting substances. The advantage of this mix are: eco-friendly, harmless to health, and a long-lasting effect. Its properties predetermine it to be used in places where microbe-free environment is a priority, mainly in residential spaces, food storage rooms, food service lines, healthcare facility. The mix is approved to be used for indirect contact with food.

Watch out for a constantly moist foundation where the the odds for slow drying are high! Spots can appear as a result. Ansilver® Profi can be added into the mortar mix, grouting substances ect. It proved to be beneficial when applied in flooding areas. Ansilver® Profi was sprayed on drying walls, which prevented moulds to grow.

Ansilver®Profi is made in a powder form, thus has no expiration date and can last for years. 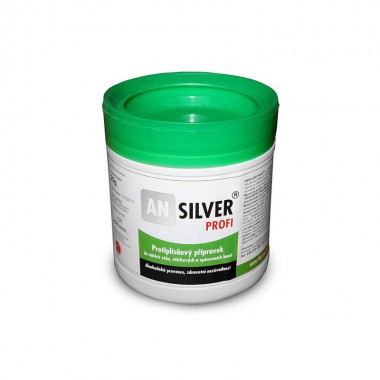 (All packaging may not be available in all markets and all points of sale.)

More informations about our products, photos of application and more.

END_OF_DOCUMENT_TOKEN_TO_BE_REPLACED

How to find us?

We are placed in Czech Republic. Find more contacts.